There are a number of reasons why we shouldn’t be drawn into blindly accepting the narrative about Generation Y’s (and Z’s) impact on the workplace. Often it seems that the most important is also the least talked about. It is that the workforce is actually ageing in the world’s leading economies. While it may be true that twenty-seven is now considered middle -aged1 for employees at technology companies, for pretty much everybody else in the working world, shifting demographics, longer lives, improving health, falling pensions and changing personal preferences are likely to mean they stay in the workforce for longer.

This is true in both the UK2 and US3, where Millennials may make up the largest demographic grouping in the workplace but are still in a minority within an increasingly diverse workforce.

The dynamics of these changes are playing out in different ways in different countries, of course,but the forces are essentially universal. They even include countries like China where the Government is considering reversing its famous policy of restricting families to one child.

While such issues are primarily macro-economic, they will also play out at local and regional levels and in individual workplaces where managers will have to create working cultures and environments that address the needs of an increasingly old and diverse workforce.

In the developed world, the workforce will not only increase in the diversity of its age groupings but also its ethnicity as Governments in places with a growing retired population and a falling workforce seek to plug the gaps with migrant workers.

This will happen regardless of any other considerations as political instability and continued levels of high unemployment throughout Africa and the Middle East, coupled with the demand for labour will make the UN’s projection that Europe’s population will fall from 730 million today to 640 million by 2100 increasingly unlikely.

Africa’s population is likely to increase by more than three billion over the next 85 years, providing a ready workforce for those countries such as Germany who will see their own populations fall significantly over the same period. .

This is not inevitable as there are obviously other challenges in using migrant labour to maintain current workforce and employment trends. Nor does it take into account the potential impact of the forthcoming wave of automated labour. Nevertheless countries worldwide are already taking steps to defuse this potential demographic timebomb. Here are just a few examples.

Japan’s population could fall from 127 million today to 83 million by 2100, with 35% of the population then over 65 years old. Europe and other developed economies are aging as well, owing to low fertility rates and increasing longevity according to a United Nations Report.

In Japan, the lack of younger workers is creating opportunities for older employees to develop new careers, especially women who are increasingly willing to take on shift work and part time and temporary roles, according to this report. It claims that employers are increasingly willing to take on more older workers as they struggle to fill vacancies while employees are taking on work because they want to and because they need work to make ends meet. Often they are jobbers, finding freelance and casual work through websites.

There is a particularly marked increase in the number of older women in the workforce. According to official Japanese Government data, the employment rate for women aged 55 to 59 rose from 58 per cent in 2004 to 66 per cent in 2014. For women aged 60 to 64, the employment rate was 48 per cent, up from 38 per cent in 2004, while it was 31 per cent for those aged 65 to 69, up from 24 per cent 10 years earlier4. This trend is likely to continue as the Government seeks ways to address the key challenge acting as a brake on the country’s economic success: Japan today has a less than three people of working age for each retiree in the country. By 2030, it will have less than two.

One initiative that has already stalled is the so-called womenomics initiative which seeks to encourage larger employers to take on more women workers. to balance against a declining population. Take up so far has been far below the Government’s own projections but they remain hopeful that the scheme can be shocked back into life, according to a recent report in the Wall Street Journal5.

Meanwhile in the UK things are a little different, although many of the forces at the work are strikingly similar. A recent report from the Scottish Commission on Older Women claims that a generation of older female workers are struggling to balance their need to carry on working with their obligations to family members, especially when they work as carers for their parents or partners. They also face age discrimination and are likely to take on lower paid work than men. The report calls on UK, Scottish and local governments, as well as employers and trade unions, to take steps to improve the situation, including more transparency over pay, flexible working policies and statutory entitlement to carers’ leave.

This pattern is replicated across the UK for both older male and female workers and is one of the key drivers of the uptake of flexible working. Earlier this year the CIPD warned that the UK was sleepwalking into a skills crisis because it was ignoring the untapped pool of talent older workers represent, especially women6. The challenge for employers is to stop agonising about Gen Y and instead consider how to offer the flexible working and support such workers often need.

One interesting development here is that the Government plans to make grandparents the latest grouping be able to take paid time off work for childcare. The Government believes the additional flexibility around sharing parental leave will help all parents return to work more quickly.

The situation in the US is complicated by the structure of the healthcare sector. The costs of healthcare are increasingly rapidly as the population ages, according to a report from Bloomberg7. This is likely to accentuate the existing move for people to work much later in life. As recently as 1992, less than 3 percent of the American workforce consisted of people age 65 and over. Today that proportion has nearly doubled, according to the U.S. Bureau of Labor Statistics, and it’s expected to reach 8.3 percent by 2022. Most of these 13.5 million older workers will be between 65 and 74, but nearly 2.6 million will be 75 and over.

One reason for this demographic shift is improved longevity. American men who reach 65 can expect to live another 17.9 years on average, the National Center for Health Statistics calculates, while women can count on 20.5 years. Both figures are up more than a third from the norms of the 1950s. With so much life still ahead, high-status workers may not want to be idle, while low-paid workers often find that meager savings won’t let them quit. At the same time, thanks to the service sector’s steady ascendancy over manufacturing, many jobs require less physical stamina.

This in turn creates another challenge, as a recent report in the MIT Technology Review8 highlighted how companies need to shift their policies on workplace technology away from an assumption that they should address the needs of digital natives and instead focus on the challenge of catering to the needs of older workers too.

Another European country aware of the ticking demographic time bomb is Germany, as a recent detailed analysis from the Financial Times uncovered9.

The solutions mentioned in the article include attempts to increase the birth rate of native Germans and plugging the gaps with immigrants as well as importing talent from Eastern Europe and the US. The crisis facing Germany is particularly severe because the country’s population is now actually decreasing. It peaked at 82 million in 2002, but is set to fall to under 75 million by 2050 with fewer younger people as a proportion of the population than any other country on Earth, while the proportion of over 60s rises from 27 percent to 39 percent over the same period. This will mean a 1.8 million shortfall in the number of skilled workers within 5 years.

The underlying problem, according to the feature is that ‘ageing societies are not necessarily good at rethinking’ because older workers have different priorities to younger workers. The example cited is that while the UK is raising retirement ages, and people are working longer voluntarily, Chancellor Angela Merkel has decreased the retirement age for German workers. This may be politically astute but it doesn’t make sense in a country with a population whose average age is already 46, second only to Japan’s. Already one in 20 Germans is over 80. By 2050 it will be one in six, based on UN data.

While the Government on the Chinese mainland has become so concerned about its own demographic issues that it has already relaxed its infamous one child rule and may soon abolish it altogether., Hong Kong has its own issues. As baby boomers head towards retirement age in the near future, Hong Kong’s workforce is expected to decline by around 14 percent, according to projections by the Census and Statistics Department. The department’s 50-year projection also predicts the city’s population will hit a peak of 8.2 million in 2043 before starting to decline. People aged 65 or over will make up 30 percent of the population by 2034, compared to 15 percent currently.

As in Japan, the authorities in Hong Kong are doing more to encourage women back to work. The Government is planning a new swathe of childcare centres to encourage mothers back into the workforce as it seeks to cope with a rapidly ageing population. The Housing Authority will be asked to include the centres in future public estates, while facilities at government offices will be rolled out to more parents. W&P

Mark Eltringham is a writer and commentator on workplace issues. He is the Managing Editor of Work&Place and the publisher of Workplace Insight. He is a fellow of the Royal Society of the Arts.
Email: mark@workplaceinsight.net
Website: www.workplaceinsight.net
Twitter: @InsightOnWork

…While such issues are primarily macro-economic, they will also play out in individual workplaces where managers will have to create working cultures and environments that address the needs of an increasingly old and diverse workforce… 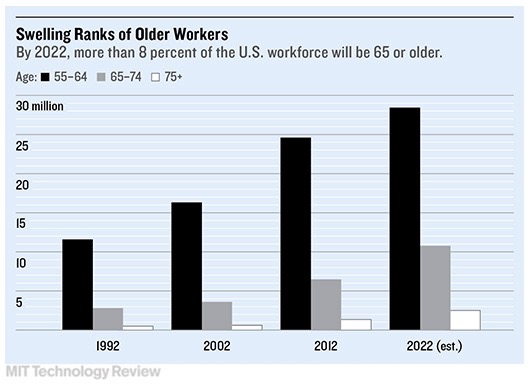 The contribution of personality to the performance of agile workers

The complex relationship between economic activity and the modern office

Future Work: How Businesses Can Adapt and Thrive in the New World of Work

Work On The Move 3 (IFMA Foundation)