Headlines reflecting bland workplace orthodoxies and virtues are shared without being read while more challenging, nuanced pieces that may express heterodox thinking are read but not shared. Understanding how the dead hand of orthodoxy and fear of disapproval can be seen resting on much of what we see in the debate about work and the workplace 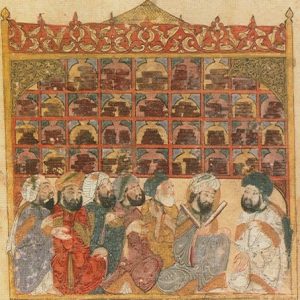 Between the 9th and 13th Centuries, the world’s intellectual centre and the source of much of its progress, discovery and achievement was Baghdad. This was the Muslim Golden Age and at its core was the House of Wisdom, established by the Caliph Harun al-Rashid. At one point, this library housed the largest collection of books on Earth and drew the greatest minds in the world to share ideas, innovate and explore ancient sources of science and wisdom from Greek and Persian texts. Muslim, Jewish, Christian and atheist scholars worked together to advance human understanding until a slow decline culminated with a later Caliph declaring that its diversity of thought should bow to a literal interpretation of the Quran and Hadith.

The end finally came when Mongols entered the city in 1258, destroying the libraries and other buildings such as observatories, before casting thousands of books into the Tigris and turning its waters black. The legacy remain however.

Human history is characterised by this punctuated approach to progress. Great advances forged in the white heat of specific times and places, applying diversity of thought and source to synthesise new ideas and make new discoveries. The modern conception of the scientific method is primarily the extrapolation of this principle to an entire discipline.

Just as the Baghdad House of Wisdom, so too the Platonic Academy, the Mouseion of Alexandria, Mansa Musa’s Timbuktu, the Florence Academy and the European Enlightenment. Each characterised by a willingness to think in new ways and create something from diverse sources. Each ultimately destroyed by neglect, anti-intellectualism, violence and the imposition of orthodox thought.

You could argue we’re in the middle of this process right now as the achievements of the Enlightenment are unravelling in many domains as people demand their own version of the truth and not just an opinion on it. A team led by Anat Maril at the Hebrew University of Jerusalem has published a report in Social Psychological and Personality Science which finds evidence of rapid and involuntarily mental processes that kick-in whenever we encounter opinions with which we agree, similar to the processes for how we respond to facts. The researchers write that “their demonstration of such a knee-jerk acceptance of opinions may help explain people’s remarkable ability to remain entrenched in their convictions”.

Orthodox thinking and an unwillingness to absorb information that challenges personal beliefs and vested interests are things we can all witness daily. Leon Festinger’s theory of cognitive dissonance focuses on the feelings of discomfort we get from trying to balance information that conflicts with what we think and the Internet allows us to create echo chambers to deal with it.

From within this safe space we are free to block out anything we don’t like and shout abuse at those who insist on sharing it. Where once we might have decided to listen, reject or synthesize ideas, now we can just block them out. As this piece in Aeon suggests, we soon create our own cults. By extension we also create our own blasphemies.

This is an argument that applies to smaller and parochial ideas, as well as the great ideas. The dead hand of orthodoxy and fear of disapproval can be seen resting on much of what we see in the debate about work and the workplace. We’re currently in the middle of conference season and the whole process drains the life from me almost as much as the daily procession of tedious ideas for comment pieces that stuff my inbox. A few people are willing to ask more interesting questions or present challenging ideas, but the majority are trotting out the same stuff as everybody else.

What surprises me most is that there are often interesting questions that could be asked about the same subjects but aren’t. Take something obvious like the link between workplace design and productivity. This debate was over a long time ago, yet still we see people proving a link, often by ignoring the complexity of that link.

The interesting question to ask about this is surely why we’re still talking about it. Similarly, I was taken with a point made by Simon Heath on Twitter this week about the lack of critical thinking about wellbeing and the suggestion that maybe it’s incompatible with work to some degree or other. Now there’s a question worth exploring. 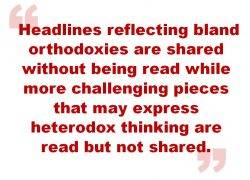 There are a range of similarly boring workplace issues which seem to be subject to lazy thinking and endless repetition which could just as easily be subject to challenge and critical thought, including open plan offices, Millennials, flexible working and equality. Each has an orthodox strand of thought that should at least be challenged or subject to more scrutiny. Instead people seem perfectly content to regurgitate or hear the same stuff over and over again. Some may even pay to hear it, which is baffling.

Yet we also understand there is some appetite to explore such issues in new and challenging ways, although we may be too worried about being seen to conform to the orthodox to express it openly. One of the fascinating aspects of publishing online is the chance to interrogate data to see how people respond to content. Sometimes we can see a contrast between what people read and what they want to be seen to read, by comparing readership numbers for pieces with how much they are shared on social media.

Headlines reflecting bland workplace orthodoxies and virtues are shared without being read while more challenging, nuanced pieces that may express heterodox thinking are read but not shared.

So, it’s very clear that there is a hunger to move beyond the orthodox and even – God forbid – open ourselves to ideas with which we might disagree. History teaches us that if we want to progress and forge new ways of thinking, then this is essential. It’s a lesson we should all absorb as the debate about work and the workplace enters an entirely new phase.

Image: Scholars at an Abbasid library in Baghdad. Illustration by Yahyá al-Wasiti, 1237