This blog is about accepting that what we believe to be true might turn out to be wrong, including in the world of work. It's about Ignaz Semmelweis and what can happen when people are presented with unacceptable ideas. Of Charles Handy and The Boiling Frog and Richard Dawkins on rejoicing in the moment when what we have held has true is shown to be wrong.

While working at a Viennese Obstetric Clinic in the mid 1840s, a Hungarian physician named Ignaz Semmelweis noticed that mothers were far less likely to succumb to a potentially fatal infection called puerperal fever when the medical staff treating them washed their hands. When he started collecting data to confirm his insight, he found that hand washing reduced mortality rates from around 10 percent to as little as 1 percent. Although, his findings predated the germ theory of disease, which left him without an explanation, in 1847 he published a book in which he proposed that the link was so evident that in future staff should always wash their hands in chlorinated lime before treating patients, to protect them from infection.

And that should have been that. Instead, the medical profession reacted with dismay to the book and completely rejected the idea, not least because Semmelweis couldn’t explain the link between hygiene and infection. His critics remained wedded to the idea that there were many reasons why people could become infected and that cleanliness could not be the primary or sole cause, even in those cases where staff were treating mothers immediately after performing an autopsy. 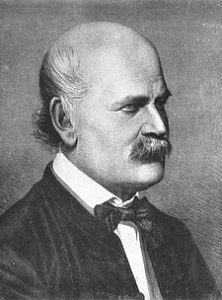 Semmelweis was removed from his post, driven out from Vienna and on to Budapest, from where he conducted what we would now consider a flame war with the profession that had rejected his work and ruined his career. The row came to a head when he began referring to his former colleagues and peers as ‘murderers’. This situation degenerated to the point that his family and colleagues concluded he’d lost his mind, so had him committed to an asylum, where he was beaten so severely by guards that he died – ironically – of septicaemia at the age of just 47. Vindication only came years later when Louis Pasteur published his work on the germ theory of disease, which at last explained why personal hygiene was so important for medical staff.

The story is now often cited as an example of what can happen when people are presented with unacceptable ideas, especially when they challenge their core beliefs. While we can feel horrified in hindsight at the actions of his peers, the story of Semmelweis highlights behaviour to which we are all prone. We often reject challenges to those ideas to which we most feel a personal attachment or which form part of our identity.

I’ve argued before that the work we do can be a trap, and not just for the most commonly given reasons. We often cling to the idea that we fit the roles we inhabit so well because they were designed for us, rather than that we have designed ourselves to fit them.

When it comes to work, the underlying deterministic fallacy behind this was exposed by Charles Handy in his book The Age of Unreason, first published in 1989 but still replete with wisdom for today. In it he talks about the need to adapt to a world of work characterised by discontinuous change in which businesses reshape themselves into Shamrock Organisations with three parts containing a core of well-qualified technicians and professionals, a contractual fringe of individuals and other organisations, and a flexible, itinerant labour force. For many people, careers would be replaced by portfolio work and they would work twice as hard for half the money.

For a book published before the Internet even existed, it is quite remarkable.

The central metaphor in Handy’s book is of a frog, placed in a saucepan of cool water which is slowly heated. The frog sits there in blissful ignorance, quite comfortable in its surroundings and not noticing how incrementally but radically its environment is changing, until it is too late and it is boiled to death.

Douglas Adams explores a similar thought in his description of a puddle of water that sits happily in its hole, convinced the hole was designed for it and nothing can go wrong, as the Sun slowly rises and the air start to warm up…

At the heart of both fables is the protagonist’s assumption that they understand their environment and their unassailable place in it. Now they could be – and are – useful metaphors for our own circumstances and identify something for which we need to be on the lookout.

But they don’t go far enough, because of something illustrated by the story of Ignaz Semmelweis. Which is that even if we are told something, we may not act on it if it doesn’t fit with one of our core beliefs. So, if we told the frog it was at risk of being boiled to death because the water in which it was sitting was on a hob, the frog might decide to stay put because water is its natural environment and there’s no hob anyway. It would reject the idea out of hand as unacceptable to it.

This easy rejection of inconvenient ideas as heretical, until there is no choice but to accept them is often described using the idea of The Overton Window. Originally a political theory describing the range of policies that the voting public considers acceptable at any point in time, the idea is now more widely used to describe how former heresies are accommodated into mainstream thinking over a period of time and in response to changing events.

We can see this process at play in the world of work right now. Although many commentators still like to talk of the evolution of work and workplaces, usually characterised with the use of some trite idea about change being a constant, we should know that we are in a period of discontinuous change, in Handy’s terms. The present and future are not merely extensions of the past.

We are being presented with new ideas on a daily basis which challenge our understanding of the world and our place in it. It’s easy to reject them – and of course many should be rejected. The challenge we face is how to keep our minds open to valuable new ideas, even when they prove us wrong or dispute our idea of ourselves.

The trick is to try to respond in the way a scientist reacts to a new idea as described by Richard Dawkins in his 2006 documentary The Root of All Evil.

“I do remember one formative influence in my undergraduate life. There was an elderly professor in my department who had been passionately keen on a particular theory for, oh, a number of years, and one day an American visiting researcher came and he completely and utterly disproved our old man’s hypothesis. The old man strode to the front, shook his hand and said, “My dear fellow, I wish to thank you, I have been wrong these fifteen years”. And we all clapped our hands raw. That was the scientific ideal, of somebody who had a lot invested, a lifetime almost invested in a theory, and he was rejoicing that he had been shown wrong and that scientific truth had been advanced impotenciastop.pt.”

Main image: from the first edition of Age of Unreason by Charles Handy

Working from home and the future of work. How quaint

Important Webinar on The Future of Work

How media architecture is reshaping the future of workplace design