The typical Latin American office has tended to follow the traditional US ‘bullpen’ office layout. But all that is changing as the region looks increasingly at the European flexible working model

As a Workplace Consultant,I have been working on the implementation of new workplace models all around Latin America for the last eight years. The existing workplace models in the region are twenty or twenty-five years behind Europe; they consist of big open cubicle workstations and many large private closed offices,which are highly influenced by the US model.

Given that the real use of space and people’s needs have completely changed,(as has happened elsewhere) due in no small part to the relentless global technological revolution, work isn’t a place where you go anymore,but an activity It has been said often enough to become a cliche but that doesn’t make it any less true.

During the past few years’ we have been measuring alongside our clients the real world usage of existing assigned workstations in eight of the leading Latin American countries,and for more than eighty of the biggest employers in those countries.

So as has happened in other countries in the world,the existing workplace models – and in this it does not seem to matter if occupants are five or twenty-five years old – do not respond to the reality of the needs of employees and organizations.

In short we are seeing:

• New needs – as a consequence of the new ways of working and mobility.

So there is a global problem in these traditional workplace models,since they are not properly used and do not fit the needs of the workers.Yet while these requirements have changed,we are still seeing the use of workplace models dating from 20 or 30 years ago.

Because of the old traditional workplace models,the margin for big savings is very large. If we now look to the existing density,measured at the same time we measured the occupancy,as part of our Workplace Health Check Exercise,the density in Latin America is low,with an average of 26 gross sq.m/employee, compared to existing figures in Europe (Spain and Portugal are 15 gross sq.m/employee).

This means that there is a double possibility of improving savings and increasing productivity with:

• Better use of the space. New Workplace Models adapted to real needs.

• Big space reductions because of the existing low-density ratios.

In the Latin America Region the Real Estate Global Costs (rents plus facility management) are lower than in Europe (Spain and Portugal),and even more if we compare with cities like London. In Latin America the Real Estate Global Costs in prime locations are around 300 $/ sq.m/ year,compared to 500$/ sq.m/ year in cities like Madrid or Lisbon.This reduces the opportunity of savings by getting an interesting ROI (return of investment).

As we all know this is not only a business case; all workplace model modifications are about people,which normally means a culture change and increasingly often,also about the digital transformation of the company.That is why important activities and concepts such as the design thinking,activity based design,co-design or change management… are all about people,with the change more about cultural organisation than personal culture.We are already digital and flexible in our private lives and we interact and collaborate in a way that in the corporate world is called New Ways of Working.

Nevertheless,I do not agree with the concept of new ways of working. Instead I believe that we are not changing the way people work,this perhaps was a few years ago when technology was not so far implemented and existing workers had not fully adopted it,but now is the time of the Millennials and other generations that have openly adopted a new way of working.

In all of our projects around the world we are seeing more often the way in which ways of working have already changed, with employees embracing flexible working,whether or not the company has explicitly authorised it.Workers are flexible and that’s why we have these low ratios of occupancy,because our employees are already mobile. So this change is more about addressing the issue of company culture transformation.

If we talk about culture,of course the Latin America company culture is twenty years behind Europe.That is why,initially,it looks harder to develop a successful project in this region. But after all this time,and more than 20 projects,the conclusion is that flexible working is easier to implement in Latin America than in European countries like Spain or Portugal,where we have an extended experience. The reason for this is there are several big global trends that are influencing the quick acceptance and implementation of flexible working models around Latin America,which include:

Latin America countries represent,with 620 million of population,8,46 percent of the World population,which is almost the population in Europe (740 million).The big difference is that Latin America is growing around 1 percent per year and Europe only 0.24 percent,so in a few years the population in Latin America will be bigger than in Europe.This means we are talking about a huge region that will represent,in the near future,one of the world biggest markets and probably the future of many multinationals that might have difficulties in their traditional markets.

But not only the size is important,the fact that the market is continuously growing means the increasing implementation by big multinationals of the flexible working models as they appreciate the need for flexibility to support future growth.

The other important data if we are considering implementing flexible working models is the high percentage of the Millennial generation in Latin America which will represent more than 50 percent of the population by 2020. In response,local and multinational companies are trying to engage this new,highly talented population by offering them a flexible, innovative workspace.

As with many other emerging countries,the difference between Latin America and Europe is that 80 percent of the population is living in cities (42 percent in Europe).This means that we have cities such as Mexico o Sao Paulo with more than 20 million residents (double than London),or Buenos Aires, Lima or Bogota with around 10 million residents (three times Madrid,Berlin or Paris) and all of them are still growing.This urban concentration together with a lack of infrastructure creates a serious problem of mobility (sometimes more than two hours of commuting time).These mobility problems influence whether a company will consider implementing flexible workplace models,as it is one of the big savings on the business case

The cultural origin of the Latin America countries is European,which means that people are open minded to all European best practices,now more than to the US influence that had been very strong in the past,with the global implementation of cubicles all around the countries. I have found a very open culture where it has been very easy to implement flexible workplace models.

Although all Latin America countries are approximately 25 years behind Europe in their adoption of such new models of working,the global trends and changing ways of working, mean we are expecting to see a much quicker transformation over the coming years. In fact,some of the big multinational companies are implementing flexible working models in their Latin American offices first,as the first implementation of their flexible programmes as they find this easier to introduce there than in Europe. So,the strong business case to move to a flexible working model in Latin America means that I would predict this change will be completed over the next five to eight years W&P

a President of 3g office Consultancy Group, he leads a group of high qualified professionals working in the eMeA and LATAM regions, with offices in Spain, Portugal , Brazil, Panama, Peru, Colombia and Chile.

…As has happened in other countries in the world, the existing workplace models do not respond to the reality of the needs of employees and organizations…

…latin American company culture is twenty years behind europe, which is why it initially looks harder to develop a successful project in this region…

…The cultural origin of the latin America countries is european, which means that people are open minded to all european best practices, now more than to us influence … 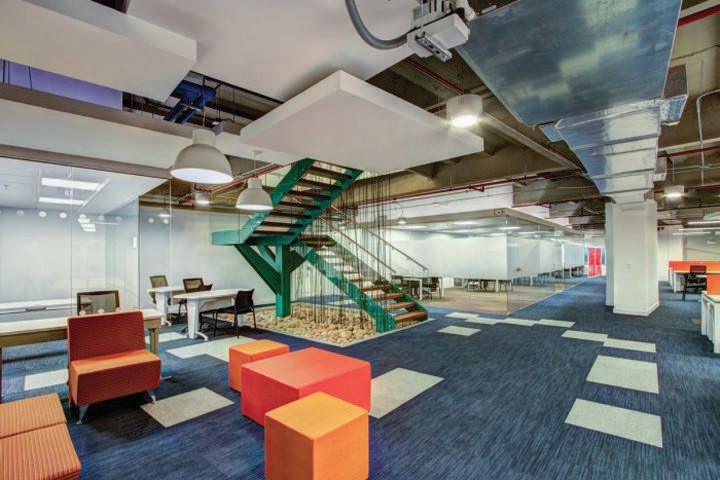 The missing piece of the workplace design and management conundrum?

A Conversation with Diane Coles Levine